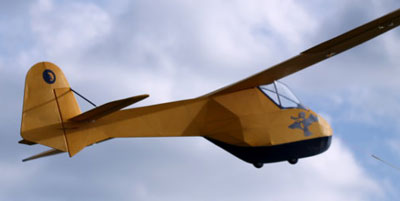 This is the kit of the old training two-seater Doppelraab.

The first flight of the original took place in August 1951 on the Wasserkuppe. The glider can' t really be described as a double-seater, because the flight instructor was positioned in an elevated way directly behind the student and reached the control stick over his shoulder.

Beginning in the years of 1955 there have been several modifications of this old glider. For the first time, version V was equipped with spoilers. This is also the reason why we decided to copy this version. However, at least for the prototype we installed two wheels in the skid, to protect the mighty fuselage from impacts. This corresponds to the construction of the first version from 1951 - but initially seemed safer for the first flights.

Our construction of the fuselage is done in supine position with the help of a jig. Fixing the first modul of the skid, the attached frames receive a firm connection. Alreasy at this point there is a relatively solid fuselage form created, which facilitates further work. In the prototype, 680 g of lead are firmly embedded in the nose. The rudder is partially assembled directly with the fuselage.
The maiden flight took place on 29th May on the occasion of the aerotow meeting at MFC Burgau.
2 clicks at low - that's it - the Doppelraab flew gently like a baby!